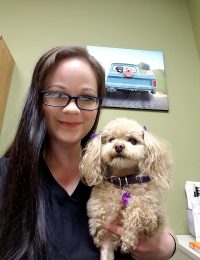 Courtney has been at All Pets since 2007. She moved to Stillwater from Tulsa and received her bachelor’s degree in Zoology in 2012. She has been working in veterinary medicine since 1996. Courtney has volunteered many hours with several organizations including: The Humane Society of Stillwater, Tulsa Zoo, Street Cats, and Grey Snow Eagle House. She has THE best dog in town, a doberman named Red Zeppelin. Zeppy has a very precious older sister, ChiChi Rodriguez Gonzalez Hernandez Cupps. In her spare time, she plays roller derby with Tulsa Derby League. Courtney recently graduated from nursing school and is employed at St Johns Hospital. She still loves coming to work at All Pets whenever she has free time!